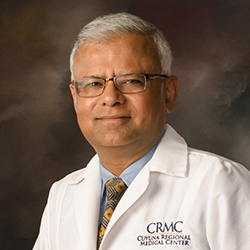 Dr. Rajesh Bhargava, a Board Certified Internal Medicine physician, began working as Director of Hospitalist Services at Cuyuna Regional Medical Center in Crosby in September 2016.  He focuses on the general medical care of hospitalized patients.

The physician relocated to Crosby from Aurora Healthcare Center in Wisconsin where he served as Director of the Hospital Medicine Program for seven years. Dr. Bhargava also has experience as Director of Hospital Medicine at Watertown Memorial Hospital and has set up several Hospitalist programs in Wisconsin since 1994. He is a Certified Improvement Advisor through Institute of Healthcare Improvement.

Dr. Bhargava started his career as a Medical Officer in Indian Army Medical Corps and was released in the rank of Major.  He has served in numerous  volunteer positions including disaster relief efforts in Eastern Nepal, relief and training missions in Eastern Bhutan, sports physicals for Kansas high school students, pediatrics care on missions in Central America, free health care to working poor in Milwaukee, Boy Scouts camp physician, medical care to indigent Mayan populations in Belize, and healthcare to people in Central /South America and the Caribbean aboard USS Comfort, a Naval hospital ship and disaster relief efforts following a typhoon in the Philippines.

Dr. Bhargava earned his Medical Degree at Armed Forces Medical College in Pune, India. He completed post graduate studies at Bombay University in India and a residency at Kansas University Medical Center.  A Fellow of the American College of Physicians, American Academy of Pediatrics, and Society of Hospital Medicine, he has published numerous research articles, book chapters and been recognized with many awards. He is also trained in Pediatrics and has also served as an Assistant Clinical Professor at the Medical College of Wisconsin for 22 years.

Outside of his practice, Dr. Bhargava enjoys wellness, yoga, biking, birding and travel.